A City and Mother 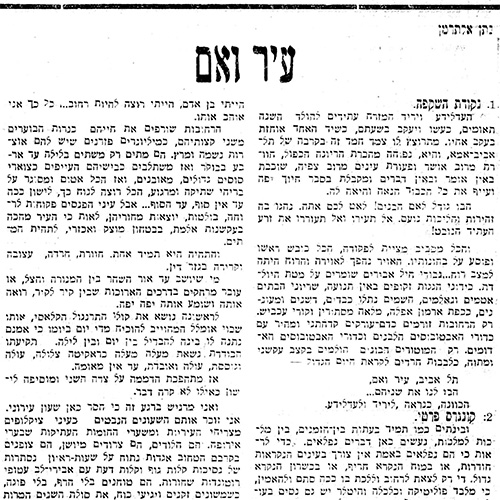 This feuilleton brings together the young city of Tel Aviv, the young writer Natan Alterman, and the young genre of the feuilleton in modern Hebrew. The youthfulness of all three charges the text with energy, with a sense of open horizons, a plethora of opportunities, and a carnival spirit. Its vivid lyrical sketch of the city moves from the real to the symbolic and back again, thriving on the tensions between dream and reality.

A City and Mother 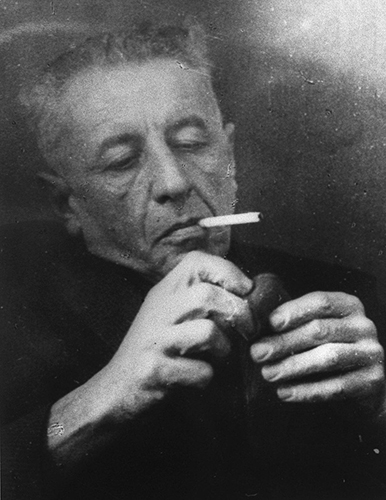 Natan Alterman, “A City and Mother,” 1934. Translated by Amy Asher

A | Point of View

Natan Alterman, “A City and Mother,” 1934. Commentary by Giddon Ticotsky

In this text, a young man, a young city, and a young genre come together at a particular historical moment. The man is 23-year-old Nathan Alterman, a few years prior to his resounding debut as a leading modernist Hebrew poet with the publication of Kokhavim ba-chuts (Stars Outside) in 1938. The city is Tel Aviv, founded barely one year before Alterman was born. And the genre is the feuilleton, which by virtue of vacillating between another two—journalism and literature—facilitates irreverence, but always of the gracious kind, out of a constant commitment to entertain. The youthfulness of all three charges the text with energy, with a sense of open horizons and a plethora of opportunities—and moreover, a carnival spirit. Everything still has to be invented: the young city needs to be mythologized, the feuilleton has yet to be established as a more literary and artistic genre, and Alterman still has to find his own creative voice.

“A City and Mother” is the title Alterman chooses for his feuilleton, perhaps innocuously, perhaps sarcastically. The common sense of the original Hebrew phrase—Ir va-em—is a major city, a metropolis. About to celebrate its silver jubilee, and boasting some 34,000 inhabitants, was Tel Aviv a big city? In terms of the Yishuv, the Jewish community in Palestine—certainly yes. But compared to Paris, where Alterman had resided shortly before composing this piece—obviously not. This expression was customarily used to refer to a significant religious Jewish community, typically in the diaspora—very far from the secular and mischievous Tel Aviv portrayed by the poet. The title, moreover, emphasizes the city’s femininity, and is reminiscent of the etymology of metropolis, or “maternal city”. Note, however, that as suggested by Uri S. Cohen, Tel Aviv is less of a mother to Alterman and more of a lover, or perhaps a young sister to be looked after.

Item: A City and Mother