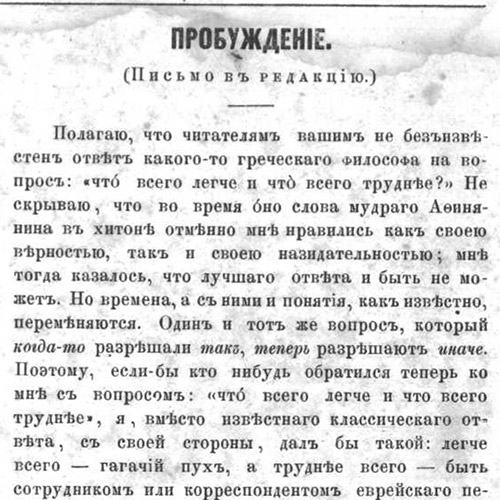 This feuilleton, published by Russian-Jewish writer Lev Levanda (1835-1888), considers how a writer should relate to the community of readers: should the writer praise Jewish communal institutions and the Jewish way of life? Or should they expose flaws with the aim of improvement? Though Levanda faced angry reactions to his criticism of Jewish “ignorance”, he saw newspapers and especially feuilletons as one of the ways to provoke change in society. 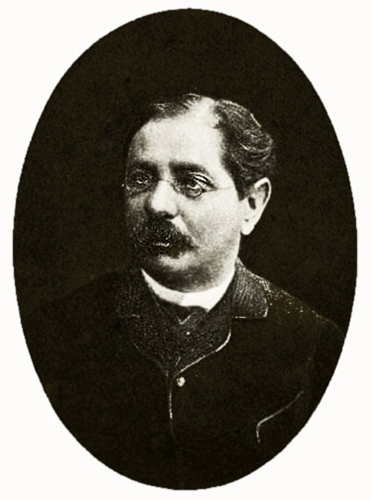 The feuilleton could have its Jewish expression in the Russian language only after 1860, when Osip Rabinovitch issued Rassvet, the first Jewish newspaper in Russian. Rassvet (Dawn) seems to have had two intersecting but contradictory motives. Rabinovitch apparently wanted to give Jews the opportunity to exalt Jewish life for both Jewish and non-Jewish readers. However, he also provided a sounding board for criticism of Jews, even hard-hitting criticism. Although Rabinovitch wasn’t sure which of the two would win out, it was the latter; ultimately, the paper often featured critical voices on Russian-Jewish life.

Lev Levanda (1835-1888), the writer of this feuilleton, was one of the most important Jewish writers in nineteenth century Russia. Among his many novels, the influential Hot Times (Goriachee vremia, 1873) stands out, in which he depicted Jews in the region between Poland and Russia at the time of the Polish uprising of 1863. Levanda was a maskil, an advocate of Jewish modernization and integration. He also promoted the use of the Russian language among Eastern Europe’s Jews.