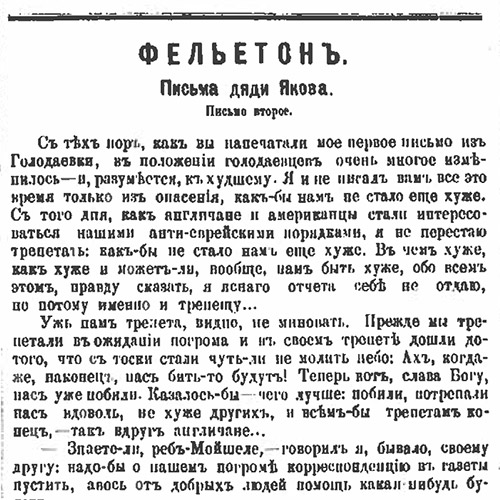 Buki Ben Yogli’s feuilleton, “Letter from Uncle Jacob,” reflects the shock and confusion among Jews in Russian during the pogrom years of 1881-1882. Using the words of the wise Uncle Jacob, the text considers various alternatives: emigration to the United States, emigration to Palestine, moving to Russia’s Far East. But ultimately, the feuilleton argues that staying in Russia makes most sense given the uncertainties of the future. 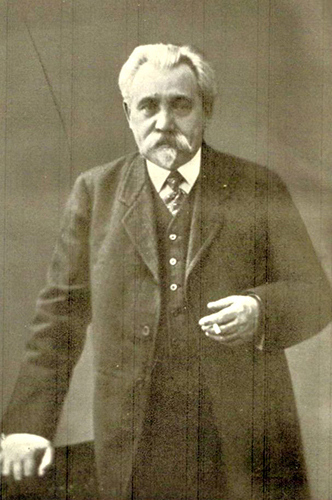 Since you published my first letter from Golodaevka a great deal has changed in the life of the people who live here – and, it goes without saying, the changes have not been for the better. The reason I have not written to you all this time was that I feared things here might get even worse for us if I did. Ever since the English and Americans started to take an interest in the anti-Jewish practices here I have never ceased to feel a certain trepidation that our situation might get even worse. Exactly in what way ‘worse’ – and whether they could even really get any worse than they already are – to be frank, I’m not at all sure, and that’s why I find myself in this state of trepidation…

This feuilleton, “Letter from Uncle Jacob” ostensibly focuses on the confusion of educated Jews during the pogrom years in Russia of 1881-82. Buki Ben Yogli, the pseudonym of the Russian-Jewish author Leib Katzenel’son (1846-1917), was uniquely placed to deal with these issues. Right away he asks the accursed question for Jews: “what to do” in response to rape, beatings, and even killing during the first pogroms of 1881-82. After the initial shock, Jews began to wonder, what next? Uncle Jacob, a stand-in voice of the author himself used in two feuilletons from this time, lists the various alternatives. We see him learning English in preparation for emigration to the United States. After his enthusiasm for the United States wanes, we encounter him studying Arabic for eventual emigration to Palestine. That too has downsides. Then he is learning Mongolian in the hope of moving to Russia's Far East. Nothing appears as attractive as remaining in Western Russia with its familiar terrain, culture, people, and Jewish way of life.