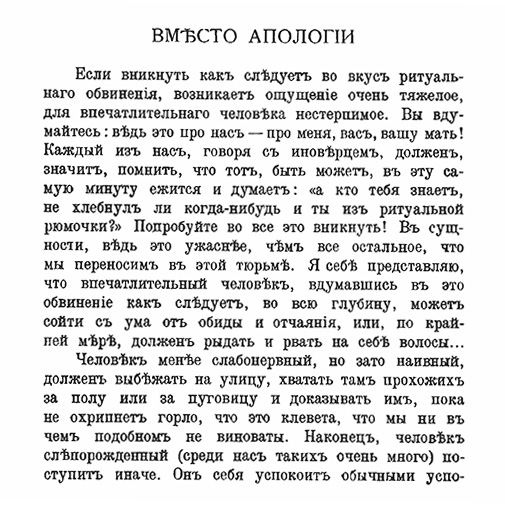 This feuilleton by the Russian-Jewish writer and political figure Vladimir Jabotinsky was originally published in 1912 in the context of the debates around the trial of Mendel Beilis (accused of ritual murder) and the question of antisemitism in Russia. This text is a good example of Jabotinsky’s hybrid political writing, with a style harkening back to feuilleton in its “Russian” dimension—as a multivalent emotionally exciting instrument—while treating the new political realities of Zionism, especially issues connected with the rise of Fascism, Nazism, and struggles for a Jewish home in Palestine. 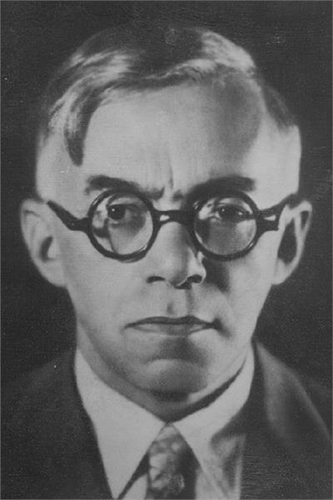 Taking a long, hard look at the current penchant for accusations of ritual, one is left with a most oppressive feeling – a feeling which any impressionable individual will find hard to bear. Just think about it: these things are being said about us – about me, about you, about your mother! So whenever we speak with a Gentile, we must remain aware, every one of us, that our interlocutor may at that very moment be cowering inside and thinking: “How do I know that you too haven’t been tippling from the glass of ritual murder?” Just try and get your head around all that! I mean, when it comes down to it, it is even worse than everything else we have to put up with in this prison of a country.

This famous essay characterizes Jabotinsky-the-author of Feuilletons (Fil’etony), a collection of feuilletons that he published in 1912 and republished in 1922. The question should be raised immediately: is this essay (as well as others in the volume) really a feuilleton? If so, where is the frivolity, the light treatment of a wide variety of themes with little connection of one to the other? Where is the impish author butting in with digressive commentary? Can the feuilleton serve as the vehicle for serious subjects—a defense of anti-Semitism, for example? “No Apologies” features Jabotinsky’s talent at creating a new genre that embodied the stylistic typology of the original feuilleton, while fulfilling the goals of persuasive political writing.

“No Apologies” was written as part of a media debate over the Mendel Beilis trial. In 1911, Beilis was accused of the crime of ritual murder—using the blood of a Christian for “ritual purposes.” Beilis, a Jew, was the foreman in the factory where Andre Yushchinsky was found murdered. Beilis was arrested, although everyone, including Tsar Nicholas II, knew that a criminal gang had killed Yushchinsky to stop him from carrying out his threat to inform the police about the gang’s criminal activities. However, Nicholas II and his Minister of Justice, Shcheglovitov, hoped to use the teen’s death to deflect political anger at the regime onto the country’s Jews.