Religious Questions, Rulings, Divorces, and Weddings from a Rabbinical Court in Poland 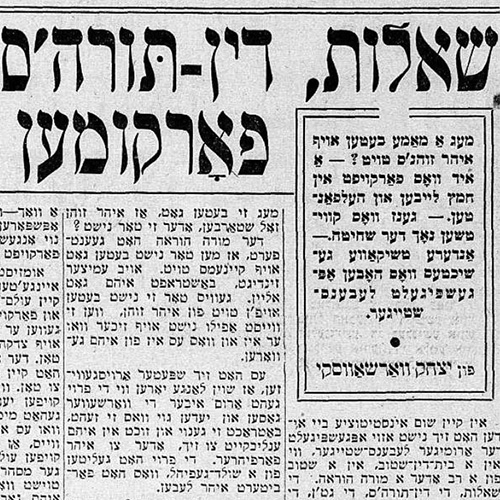 This feuilleton, published by Yiddish writer Isaac Bashevis Singer under the pseudonym Yitskhok Varshavsky, tells a series of ‘tsikave geshikhtes’ (spicy stories) about the transgressive behavior of common Jews. In a highly entertaining manner, the feuilleton depicts the meshugas (craziness) of the lowest strata of Warsaw Jewry. It is an early example of the literary trends of commemoration of ‘a world that is no more’ that would dominate post-war Yiddish literature.

Religious Questions, Rulings, Divorces, and Weddings from a Rabbinical Court in Poland 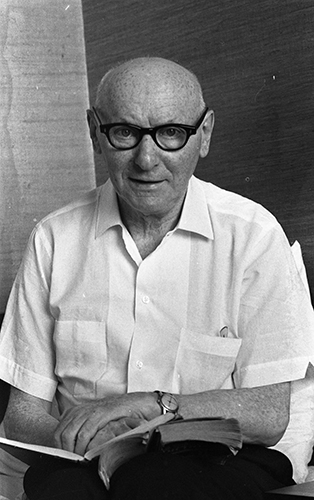 With the kind permission of the Isaac Bashevis Singer Literary Trust

Can a mother pray for her son’s death? – A man who sells lions and elephants as leavening. – Geese that shriek after slaughter. – Other odd stories that reflect an entire way of life.

No Jewish institution better reflected neighborhood life than the rabbinical court – whether in the house of a rabbi or any other religious adviser. The ritual questions and rulings, the divorces and the weddings that passed through the rabbinical court offered a picture of everything that was unique and remarkable about Jewish life. Many of these questions and rulings could serve as themes for writers both of novels and of literary sketches. The writer of these very lines had the pleasure of observing what takes place in a rabbinical courtroom in Warsaw for many years.

After emigrating to the United States in May 1935 from Poland, Yitskhok Bashevis (later known as Isaac Bashevis Singer in English) began working as a freelancer at the Forverts where he became a staff writer in 1942. Forverts, the Jewish Daily Forward, was the main Yiddish daily in the US. An important segment of the newspaper was devoted to fiction, criticism, and life-writing by leading Yiddish writers such as Scholem Asch and I. J. Singer.

Starting in 1939, Bashevis used the pseudonym Yitskhok Varshavsky (Isaac from Warsaw) for his weekly feuilletons in the Forverts. Varshavsky’s feuilletons during the war addressed some of the same topics that also informed Bashevis’ literary work: dybbuks and split Personalities; polygamy (‘filvayberi’); family life; the war; Jewish Poland, past and present; Yiddish names; and Yiddish literature.

Item: Religious Questions, Rulings, Divorces, and Weddings from a Rabbinical Court in Poland