Letters of a Parisian Woman 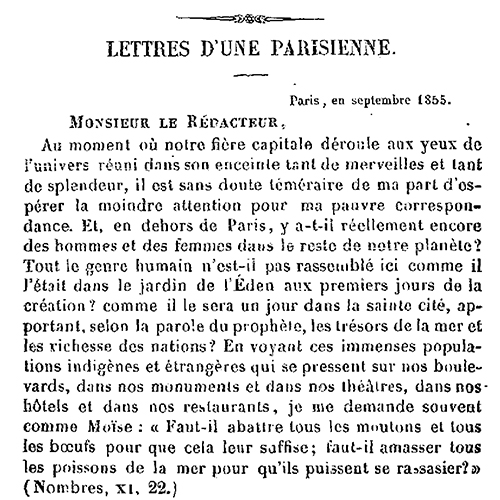 French Jewish writer Julienne Bloch uses her series “Letters of a Parisian Woman” to comment on current events and reflect on citizenship, gender, and Jewishness in the middle of the nineteenth century. As a rare woman contributor to the French Jewish newspaper “L’Univers Israélite de France,” Bloch called attention to the political significance of social news and women’s interests and provided fresh and substantive insights into contemporary French Jewish existence.

Letters of a Parisian Woman

In this moment in which our proud capital reveals to the eyes of the world so much wonder and so much splendor united within its walls, it is doubtless bold of me to hope for the least attention to my humble correspondence. Besides, outside of Paris, are there really still men and women on the rest of our planet? Is not all of humanity assembled here as it was in the garden of Eden on the first days of creation? as it will be one day in the holy city, bearing, according to the words of the prophet, the treasures of the sea and the riches of the nations? Upon seeing these immense native and foreign populations that throng in our boulevards, at our monuments, and in our theaters, in our halls and in our restaurants, I often ask myself, like Moses: “If all the sheep and all the cows are slaughtered, will that suffice; if all the fishes of the sea are gathered, will it satisfy them?” (Numbers 11:22.)

In the opening lines of her feuilleton, French Jewish writer and educator Julienne Bloch implicitly positions herself as the titular “Parisian woman,” an urban observer and social commentator whose “humble correspondence” is hardly serious news. But as she describes recent events, her unique perspective begins to emerge. Contemplating the crowds assembled in Paris to witness the spectacles displayed at the 1855 Éxposition Universelle, an international fair celebrating French advancements in arts and industry held that summer, she identifies with an overwhelmed Moses wondering whether there can ever be enough food for his people. Reflecting on “the royal pomp deployed in [Queen Victoria’s] honor by France’s capital,” a proud Bloch imagines this as the revenge of Vashti, the dishonored first wife of King Ahasuerus in the Book of Esther; going further, she fantasizes about Queen Victoria following Ahasuerus’s example and ending up with a Jewish spouse.

Item: Letters of a Parisian Woman