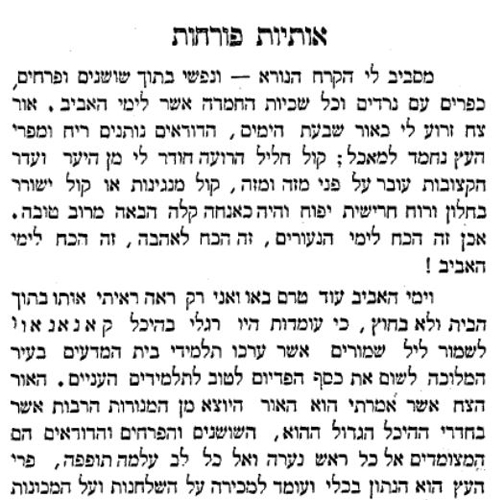 This text by David Frischmann is one of the first mature and successful Hebrew feuilletons in the 19th century, an urbane, witty, light, and yet significant text in the tradition of the French, German, and Russian feuilletons. The text begins with a light-hearted description of the Jewish community in St. Petersburg, but it also raises issues of sociability and modernity, as well as questions about Jewish writing—in Jewish and non-Jewish languages—and the place of Jews in the history of European press (including the feuilleton) and literature. 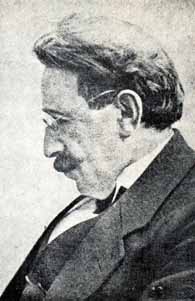 The awful ice surrounds me, and my soul dwells in roses and flowers, henna with spikenard plants, and all the delightful treasures of the spring. Pure light is sown around me like the light of the seven days of creation. The flowers of the mandrake emit their fragrance and the fruit of the tree is scrumptious; the sound of the shepherd’s flute rises from the forest and a flock of goats passes me by. The sound of music and song nears my window and a silent wind is blowing like a light, pleasant sigh of comfort. Indeed, this is the power of youth, the power of love, and the power of spring days!

This feuilleton was published in February 26, 1886 by the young writer David Frischmann in Ha-yom (The Day), the first daily Hebrew-language newspaper in the world. Yehuda Leib Kantor established Ha-yom in St. Petersburg, the capital of the Russian Empire, just a couple of weeks earlier in collaboration with other contributors. Their goals were to create a universal, pluralistic forum that would rise above internal differences in the Jewish public sphere, as well as to move beyond the realm of exclusively Jewish issues, adapt to European journalistic standards, and introduce Jewish readers to events in Russia and around the world. Frischmann’s feuilleton was entitled “Otiyot porḥot” (“Flying Letters”), part of a series of feuilletons with this name that appeared in Ha-yom in a recognizable, designated place on the second page below the line. He used the pen-name “David” as a distinct feuilletonist persona. “I will serve you under the line,” David announced to his readers in an intimate tone, when inaugurating the series, “and from here I will set my eyes on my surroundings to discern and describe what’s above and what’s below, what’s in front and what’s behind.”