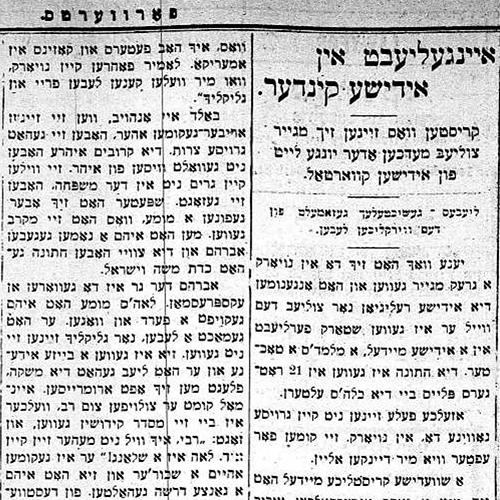 Journalist Abraham Cahan wanted to bring both mass appeal and human interest to Yiddish newspapers by including features and feuilletons, articles that were meant to entertain readers as much as inform them. He adapted this feuilleton, “Converting for Love,” from a similar piece he had published in English in 1901. Focusing on stories in which Jews and non-Jews fell in love, Cahan chose a theme that would have interested both Yiddish and English readers, who may have identified with the subjects of the article or were simply curious about lives different from their own. 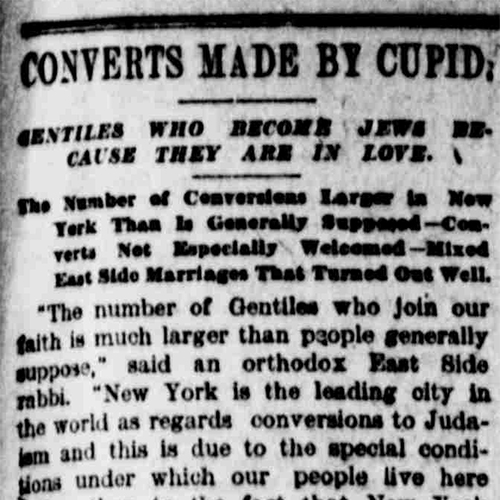 Converts Made by Cupid

Subtitle: “Christians who Convert because of Jewish Maidens (medkhens) or Youths from the Jewish Quarter”

In March of 1902, journalist and socialist agitator Abraham Cahan returned as editor of the New-York-based socialist Yiddish daily Forverts (Forward) after a five-year hiatus. Cahan had been one of the newspaper’s founders in 1897 and its first editor-in-chief, but had resigned after not receiving full creative control. In the interim, Cahan wrote instead for English-language newspapers like the New York Commercial Advertiser and the New York Sun. Unlike the Forverts, these newspapers were not politically radical, nor did they speak to an audience primarily composed of Eastern European Jewish immigrants. In these publications, Cahan mainly wrote a genre of features called “urban sketches,” describing life in New York’s immigrant neighborhoods to the newspaper’s readers. Urban sketches were a common theme for features in American mainstream newspapers in this period, but were also a classic theme for feuilletons in various countries going back to the second half of the nineteenth century. When he described this phase of his career in retrospect, Cahan switched back and forth between calling these articles “features” and “feuilletons”—highlighting his engagement with American and transnational journalistic trends (Cahan, vol. 4: 276-9).