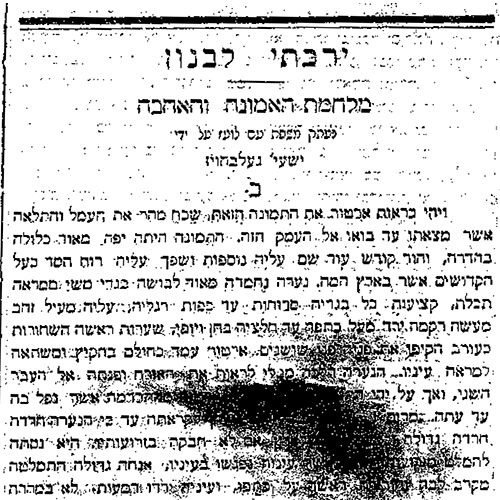 “Faith and Love” is the second installment of a popular roman feuilleton that was translated into Hebrew from English-Jewish writer Grace Aguilar’s novel “Vale of Cedars”. Each week, readers of “Ha-levanon” (“Lebanon”) could follow the latest adventures of the lovely Miriam as she struggled with her love for the British gentleman Arthur Stanley and sought to avoid the perils of the Spanish Inquisition. This text demonstrates the popularity of the roman feuilleton in Europe and across the Jewish world. 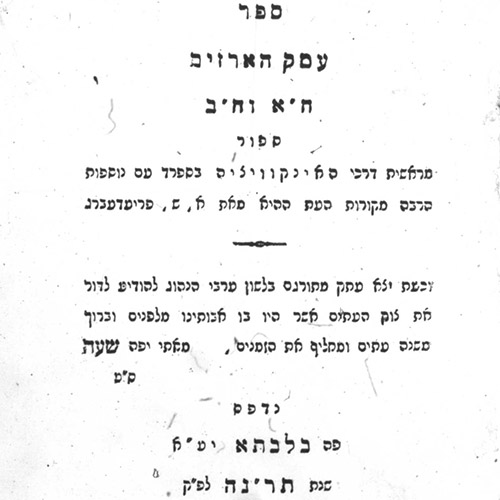 When Arthur saw this vision, he quickly forgot the travails and hardships he had gone through before his arrival in this valley.

“Faith and Love” is the second installment of a serialized novel that was published below the line in the Hebrew weekly newspaper Ha-levanon (Lebanon) from August 1874 to April 1875. Founded in Jerusalem in 1863 and later published in Paris, Mainz and London, Ha-levanon was one of the first Hebrew papers to set aside space for the feuilleton, in a section titled “Yarketei levanon” (“The Edges of Lebanon”) starting in August 1871. But in contrast to other European Hebrew papers like Ha-melits, Ha-levanon primarily dedicated the space below the line to roman feuilletons, novels that were often translated from the German-Jewish press and printed in regular installments. In this case, each installment was prefaced by the words “copied from a foreign language by Yeshayahu Gelbhaus,” a German Jewish writer and translator also known as Sigmund Gelbhaus (ca. 1850-1928). The text, however, does not mention that it is a translation of Grace Aguilar’s (1816-1847) popular novel The Vale of Cedars, which was written in 1834 but published in 1850, a few years after the English-Jewish writer’s death.

Item: The War of Faith and Love