Uncle Bohor and His Wife Djamila 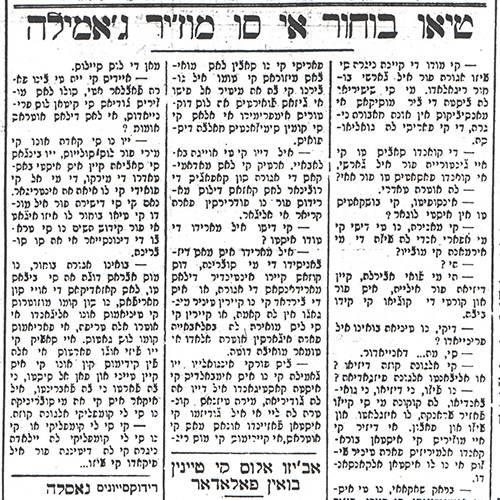 Moshe Cazes’s satirical feuilletons in Ladino give us a glimpse of life in Jewish Salonica in the late 1930. Both texts feature conversations between a husband and wife, mocking the older generation of Jews, those born between the 1860s and 1880s, while ironically identifying with their inability to cope with the changes of the late 1930s.

Uncle Bohor and His Wife Djamila 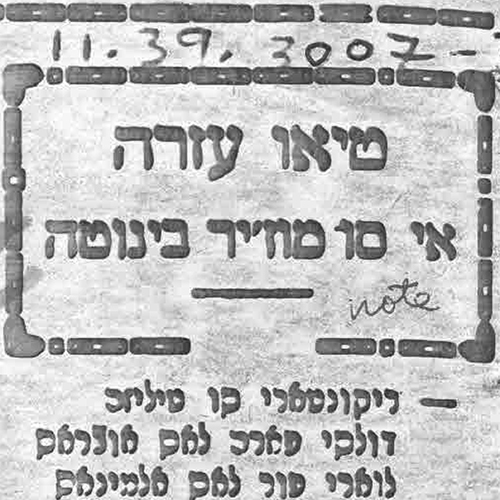 Uncle Ezra and His Wife Benuta

[…] - Djamila: Did I tell you that I was there when my sister’s daughter had an abortion? - Bohor: And? - Djamila: And I went to see her. They were saying that her life was hanging by a thread and she barely survived. - Bohor: What for, did her pregnancy not go well? - Djamila: Yes, but… I’m so angry I could burst. - Bohor: What, was it something she wanted? Or did she lift a heavy load? - Djamila: No, my boy, no wants, no nuts. The floozy lady wanted to make herself European (fazer franka), so the child was devoured by a peacock. And to think that there are women that are turning the whole world upside down to have children and cannot have them. - Bohor: Stop joking around – I don’t understand you. What do you mean – he was devoured? - Djamila: Dear God, what is so difficult for you to understand, Bohor. Don’t you know that now it is the vogue among the modern little madams (madamikas) who don’t want to feel the pains of birth nor to raise children? - Bohor: And? - Djamila: And, she got up, this devil of a woman, went to who knows what demon of a doctor and the child was devoured. - Bohor: From your mouth to God! Did she really do that, the bastard (mamzera), by her own doing? Bravo to their “Europeanness” (frankedad) for the baggage that these little madams took up and brought all that is wicked these days. But it seems that those no-good scoundrels don’t know about the new measures that the government is taking, that will first bring down heavy fines on the doctors and later on the women that do such things2. - Djamila: May God hear you, dear husband. In the end, the little madams can ruin their husbands’ households by not being able to give birth and nurse. - Bohor: What did the husband say about all this? - Djamila: The husband is even more full of nonsense than my niece. There are two things I want to understand about today’s so-called husbands: either it is true that they do not want anything “happening” in the bedroom, or they want the lady of the house to die so that another one will lie down in her place and they will take a new dowry. - Bohor: Do you see why I am disgusted, Djamila, because it is not for nothing that God has cursed the Jewish people. See how they taint the Jewish law and tradition, some more than others, and we want the heavens to take pity on us. […]

Moshe Cazes, “Uncle Bohor and His Wife Djamila” and “Uncle Ezra and His Wife Benuta,” 1939. Commentary by Tamir Karkason

These two satirical feuilletons were written by Moshe Cazes (1889/90–1942/3) of Salonica in the late 1930s. The feuilletons, collected and published by David Bunis (1999), feature the fictional characters Uncle Ezra (or Bohor) and his wife Benuta (or Djamila) and reflect life in Jewish Salonica. Since several thousand people bought copies of newspapers Aksyon (An Action, 1929–1940) and Mesajero (A Messenger, 1935–1941) each day, the heroes of Cazes’s pieces must have been the talk of the day in Jewish Salonica at the time.